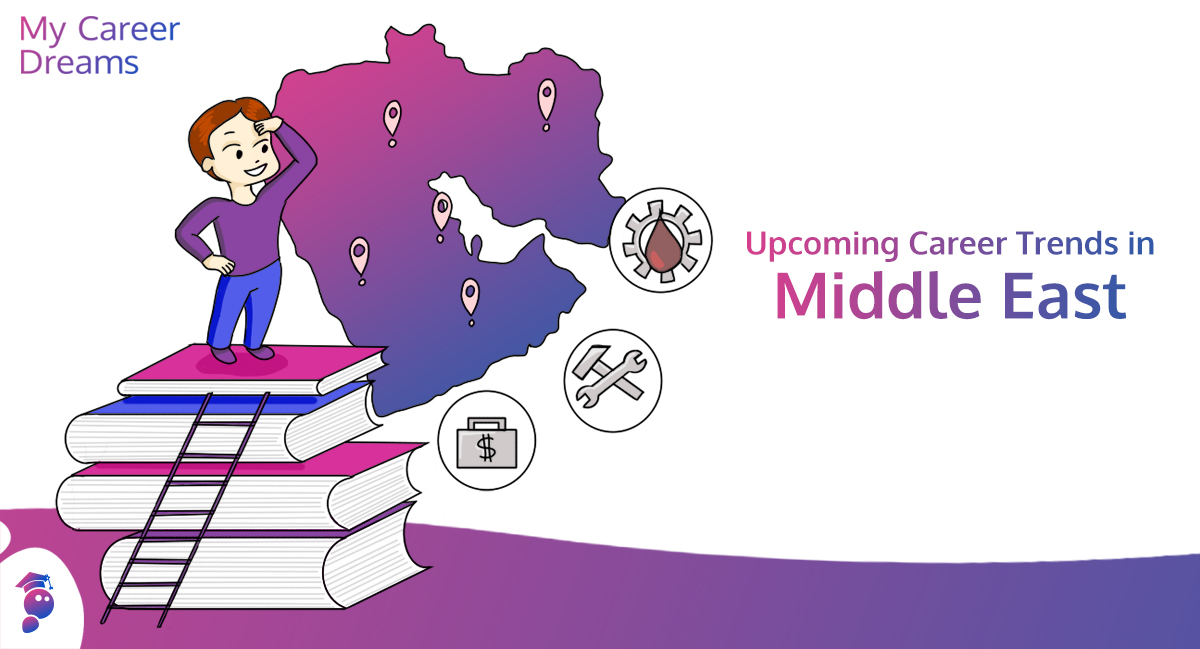 Upcoming Career trends in the Middle East
Introduction
Of all the regions in the world, the Middle East has got to be the one region that experienced economic growth at the fastest rate in the world, all thanks to the discovery of huge reserves of oil. With this discovery came massive foreign investment transforming what was once only a barren desert into one of the largest economic hubs in the world. And, consequently, a great place to pursue a career.
But times are fickle and what is successful today may not be at such a good place tomorrow. While we doubt the Middle East is going to lose its status as a global market anytime soon (or ever), it is true that shifting trends in world industries is having an effect on what industries will remain viable in the future in the area. So, it’d be prudent to first find out what industries are doing well in the Middle East at present and are expected to excel in the coming years, before one decides to commit to a career and invest his time and energies.
The best industries to be a part of in the Middle East
Oil, Gas and Petrochemicals
Probably the most obvious choice of them all, it would seem the Oil, Gas and Petrochemicals industry is still going strong in the Middle East and by our statistics, it isn’t showing any signs of stopping soon. This is due to the steady demand of oil in the international market, that hasn’t degraded much despite all our advancements made towards alternative fuel and electric cars in the recent years (go figure!). What’s even more interesting is that this industry offers its employees one of the best pay rates, job securities and even great work-life stability. So, while everyone on the global scale may be working to the end of our dependency on oil, it doesn’t seem like that is going to affect the industry in the Middle East for quite a few years to come. And even if we do end up replacing oil with some other alternate fuel, the demand for petroleum products like plastics isn’t going to die out any time soon
IT, Electronics and Communications
With the IT and Electronics industry slowly rising up to be the largest industry in the world, it’s impossible that the industry wouldn’t be gaining traction in the Middle East. Thanks to the ever-increasing value of data and technology products, along with the constant innovations that are a staple of this field, the IT industry is growing at a massive rate and it’s showing no signs of stopping at all. In the Middle East in particular, a job in IT means great prospects for growth in the future along with some of the best work-life balance statistics among all industries in the Middle East.
Banking and Finance
Having a region be an economic hub without a thriving banking and finance industry is unheard of, and the Middle East is no exception to this rule. No matter what industry any company belongs to, it needs to have a finance department and ties to a bank to carry out all its financial transactions, and with business being operated at the enormous scale that it is in the Middle East, the Finance and Banking industries are booming with growth. The industry offers its workers with great salary packages and job security, second only to the Oil and Gas industry. Employees can also expect a great growth potential in this industry meaning more jobs in the future and higher chances to climb up the ranks.
A word of caution though…
While these three are the top industries to be applying for a career in the Middle East, breaking into these industries is going to be a little harder for foreigners in the coming years. The reason for this is quite simple: the local workforce is both growing and talented, but severely underemployed. By 2030, the region is set to expand its tertiary-educated talent pool by 50%. However, currently two in five graduates are out of a job. This means that foreigners looking to break in to the Middle Eastern industries will have to work harder to get accepted and stand out to divert the attention of companies from local talent.
But then again, don’t you have to work hard for everything worthwhile in life?
Sources